Pitcha Makin Fellas are a deadly artist mob from Ballarat. They are passionate about their culture and community and want to share it.

We welcome deadly artist mob, Pitcha Makin Fellas, to the Arts Academy family as Adjunct Fellas. We share their celebration of our country’s First Peoples.

The Pitcha Makin Fellas have taken up studio in the Old Post Office Building on the Camp Street Campus, Ballarat. If you have taken a stroll down Lydiard Street North towards Sturt Street, you may have seen their luminous art in the windows.

Over the next year, the Fellas will be working with Arts Academy students and the community to share their art and story making.

The Pitcha Makin Fellas is an art collective based in Ballarat, Victoria.

Made up of four Koori men whose ancestries hail from different language groups across Victoria, the artists and writers first got together weekly to yarn, paint and write. The combined narrative of Myles Walsh, Ted Laxton, Adrian Rigney and Peter-Shane Rotumah is a distinctive new voice in the Australian art community.

The Fellas are passionate about culture and community, and they create vibrant expressions of their personal histories and stories as Aboriginal men. Humour is an important part of making art, inviting the viewer to open their eyes to the history of this nation. Their work carries a punch, with explosive colours and patterns that always offer a message. It also carries the pride the Fellas have in their culture, and the strength of learning and reviving story and connection to culture.

First meeting in 2013, the group started collaborating on paintings straight away, even though four of the original seven members had not painted before. They built a unique style of working together, and the group has since had many achievements. These include group and solo exhibitions, winning awards, leading community and school-based projects and workshops, and working on diverse projects, from local schoolhouses to the Koorie Heritage Trust and Bunjilaka at the Melbourne Museum. Their work also appears in private collections and public institutions, such as the National Gallery of Victoria and the United Nations in Geneva. Their work featured in the opening of the Lumina Luz Festival in Portugal in 2015, and their animated works were projected larger than life in White Night Melbourne and White Night Ballarat in 2017 and 2018, events that attracted hundreds of thousands of viewers.

The Pitcha Makin Fellas are part of the Artlands 2018 program in Bendigo, Victoria.

Story-telling is central to the Fella's activity. In 2017, Yorta Yorta man, Myles Walsh published his picture book, What's in a Name. Joyously illustrated by the Fellas, Myles' story tells of how his family came to have their traditional names erased. The book was named a Notable Book 2017 in the Younger Readers category by The Children's Book Council of Australia.

Get your signed copy by sending us an email right now. 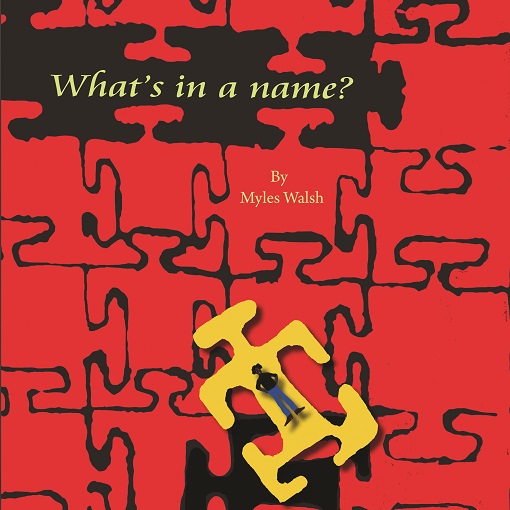