DNA fingerprinting owls from their feathers 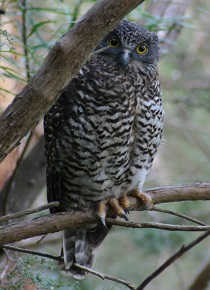 Researcher Dr. Fiona Hogan has developed and perfected an innovative, non-invasive technology for studying threatened apex predators. DNA isolated from a single shed feather can be used to obtain a DNA profile that can unequivocally identify an individual, its species and gender. This technology can be used to allow conservation scientists to collect a large amount of data rapidly and inexpensively, without causing stress or harm to individual birds, and reveals previously unknown information about these elusive birds.

Wildlife research often relies on labour intensive catch-and-release techniques that are time consuming and may cause stress to the animal subject, or hours of observation in difficult to reach places. In ecological studies, it is often difficult to obtain sufficient data due to the time consuming and invasive nature of traditional sampling methods. Most of Fiona’s research has focused on profiling Australian owls; threatened birds that are important to ecosystem health. The increasing urban environment is encroaching on the natural forest habitat of these birds, and Fiona’s research is directed toward understanding the movement 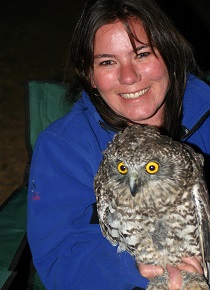 of these large top-order predators into urban systems. These birds are notoriously difficult to observe due to their nocturnal habits and elusive nature. The technology she has developed is non-invasive as only shed feathers are required to extract the DNA profile, and can be performed more rapidly than traditional methods. DNA profiling reveals detailed information such as the dispersal of juvenile owls and mate-fidelity (whether or not the same pair of owls breed together each year), which cannot be effectively determined using other field techniques. Collection of feathers requires little expertise; hence she has enlisted the help of people all over Australia, and has gathered owl data faster than ever before!

Eggshells, hairs and scats (faeces) can also be used to create a DNA profile, which means that this technique can be applied to many other animals. Using DNA profiling, Fiona has already uncovered previously unknown information on the breeding habits of the Powerful Owl (Ninox strenua), and is currently applying this technology to studies on koalas and Tawny Frogmouths. This technology looks to greatly improve the way wildlife conservation research is performed in the future.

Koala droppings are key to understanding their genetics 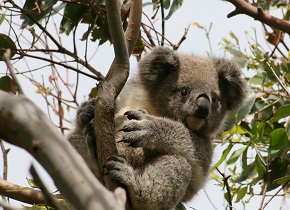 PhD student Faye Wedrowicz studies the structure and diversity of koala populations by collecting droppings (scats) and analysing the trace amount of DNA present. Victorian koalas were almost driven to extinction in the early 20th century, and as a result much of the population is genetically alike and is vulnerable to many threats including disease. By looking at the sequence in non-coding regions of DNA obtained from faeces, Faye can determine relatedness between individuals and identify pockets of the population that are isolated from one another. This research can be used in the future to improve conservation strategies for this iconic native species.

Most Victorian koalas are descended from a very small group of individuals after overhunting saw a near-extinction event in the 20th century; these animals are now highly inbred and have a low genetic diversity. The koalas of South Gippsland are not derived from this same stock, and are the only known remnant of the original Victorian koala population. These koalas are much more genetically diverse and as a result are more resistant to environmental pressures, and are much less vulnerable to a population collapse. 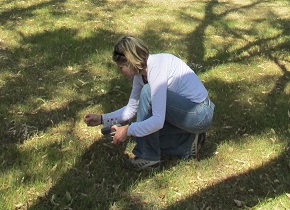 Faye’s research uses DNA isolated from faecal samples (scats) to profile koalas. DNA quality in scats deteriorates over time, and during her first major research project Faye identified the best storage conditions for the samples, and this has allowed her to produce better data more rapidly in subsequent studies. Traditional methods for genetic study involve sample collection from individual animals, which can include taking blood and tissue biopsies. This causes stress to the animal and is a time consuming and difficult process as individual koalas are often found in tall trees many metres above the ground. The genetic analysis of scats can be performed rapidly with no stress to animal subjects, making it an ideal method for koala research.

Whilst her research is ongoing, Faye has already identified two possible groupings within the local Strzelecki Ranges that may have a relatively low level of gene flow between them, suggesting are separated by environmental barriers. She is investigating the impact this genetic isolation may have on the two groupings. As Victorian koalas have such a low genetic diversity, research in isolated communities can provide insight into future conservation and management programs, and Faye’s work seeks to improve conservation outcomes for this fragmented species.