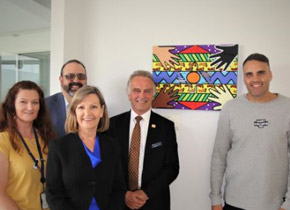 The University’s Vice-Chancellor and President, Professor Helen Bartlett, will unveil artwork commissioned for the RAP at the Berwick campus launch at 4:00pm on Friday, 6 December.

The three-year plan will guide the University in its commitment to reconciliation, both internally and within the communities within which it operates.

Initiatives include a new target of two per cent Indigenous employment by 2021 and ensuring students receive Aboriginal and Torres Strait Islander perspectives in their studies, also by 2021.

As a RAP partner, Federation University is one of more than 1,000 organisations in Australia working to build and implement plans of action based on the key pillars of the RAP program: relationships, respect and opportunities.

“The RAP is about recognising the special place of Aboriginal and Torres Strait Islander people as the First Australians and the power of education to create genuine opportunities to transform lives and enhance communities.”

“The new RAP will guide us in our commitment to reconciliation, both internally and within the communities in which we operate.”

“It builds on our previous RAPs to really challenge the university to embed reconciliation across the organisation, its campuses and centres with measurable actions and targets.”