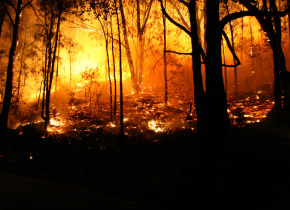 Awarded through the Linkage Infrastructure, Equipment and Facilities (LIEF) scheme, the grants have been allocated to many academics throughout Australian universities.

Dr Jess Reeves is a chief investigator in the successful LIEF grant for a national facility for the analysis of pyrogenic carbon.

“This is particularly important for dating ancient fire events, either due to wild fire or lit by people. It is also significant for assessments of soil carbon sequestration.”

Professor Peter Gell also is part of a research group awarded funding of $464,000 to establish a facility to enhance Australian capacity to analyse the stable isotope composition of silicate minerals.

“The facility will enable the Australian archaeology, and earth and environmental science communities to better utilise stable isotopes of silicate minerals such as clay and opal and the hard structures laid down by algae, grasses and sponges for example,” Professor Gell said.

Professor Leigh Sullivan, Deputy Vice-Chancellor (Research and Innovation), congratulated all of the FedUni researchers on their grants.

“Our FedUni researchers will play a major role in the success of these projects,” Professor Leigh Sullivan, Deputy Vice-Chancellor (Research and Innovation), Professor Sullivan said.

“The University will continue to expand its research footprint in the pursuit of large-scale projects such as these.”