Nancye is one of Australia’s favourite theatrical actresses. 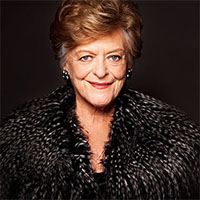 Nancye is an accomplished actor, dancer, singer, choreographer and director. She began her career with J.C. Williamson Theatres Ltd as a chorus member in My Fair Lady. She went on to star in many major musical productions including Sweet Charity, Chicago, Sweeney Todd, Guys & Dolls and 42nd Street.

Nancye Hayes has made a significant contribution as a theatre director. Her credits include The Boy from Oz, Sweet Charity, Gypsy (The Production Co.), Crazy for You and The World Goes Round (Western Australian Academy of Performing Arts), Australia’s Leading Ladies Concert (Brisbane Festival), The Wizard of Oz (GFO/SEL/Macks Entertainment), Noel & Gertie (Christine Dunstan Productions). Most recently Nancye directed And the World Goes Around for the Western Academy of Performing Arts.

Nancye appeared in SIX DANCE LESSONS IN SIX WEEKS with Todd McKenney for the Ensemble Theatre in 2017.

Nancye has received Lifetime Achievement Awards from The Green Room, The Sydney Theatre and The Helpmanns.